We are excited to announce the next San Francisco Kubernetes meetup will be July 26, 2017 at Databricks, Inc. in San Francisco.

If you want to speak or do a 5-min lightning demo, please ping me over meetup or twitter (@baldwinmathew)

As part of the long term goal to contribute to the Kubernetes ecosystem of components and tools, at Databricks we've implemented a Python tool called kubecfg to allow us to succinctly describe deployment configurations in a highly modular way. In its current version, kubecfg will compile Jsonnet files using the Python _jsonnet library from Google, accepting command-line arguments to override specific fields in a generated dictionary or to pass arguments to a Jsonnet script that accepts top-level arguments.

While Ingresses provide a simple description of how to route traffic for a domain to multiple services, they don’t help much with software releases. Label and content aware routing lets us create more reliable, flexible, and faster release and test processes. We’ll cover incremental blue/green deploys, testing in production, and service refactoring.

Mark McBride is founder and CEO of Turbine Labs, makers of Houston, a modern traffic management plane. Prior to Turbine Labs he ran server side engineering at Nest. Before that he worked at Twitter, working on migrating their rails code base to JVM-based equivalents.

Our friends at Databricks have offered to provide space for this upcoming event.

Spear St and Main St are  closed because of renovations.

You will want to enter from the alley on Mission St. which will lead you through to 160 Spear St and the building lobby. You will a see a Starbuck Sign in the alley. 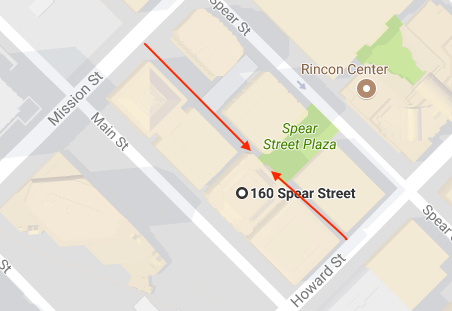